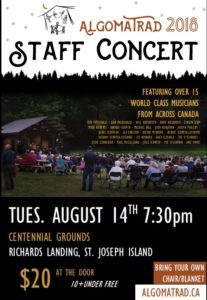 Several evening events are open to the public including the always-superb annual Staff Concert, Tuesday, August 14, 7:30 PM at the Centennial Grounds in Richards Landing. Admission at the door is $20, children 10 and under free. Download a concert poster HERE. Featuring over 15 world-class musicians, the Staff Concert line-up will include:

Singer and guitarist Andy Hillhouse, Artistic Director for the Harrison

Festival of the Arts, founder of the Canadian Celtic group Mad Pudding, and regular accompanist for Pierre Schryer and Celtic rock band The McDades;

Michael Ball and Jody Benjamin (ballandchain.ca), who have been performing and recording on the Canadian music scene for years with their own projects, running the gamut from old country and alt country to cajun and zydeco and from bluegrass to American Old-time;

Fiddler, pianist, and accordionist Emilyn Stam (emilynstam.com), with 4 Canadian Folk Music and 2 Juno Award nominations to her credit and whose creative musicianship has been heard around the world with the Eastern European party-punk-super-band Lemon Bucket Orkestra, Dutch band Té, Canadian award-winners The Shoeless, and Italian accordionist Filippo Gambetta;

Old-time banjo and Irish flute players Mark Roberts, who was part of seminal Irish-American group Touchstone, toured with the Red Clay Ramblers, and has performed on Broadway, and Andrea Cooper, who doubled the fun when she met Mark as they have performed music on two flutes, twin penny whistles, and double banjos from Vancouver to Cotuit.

Joseph Phillips, returning this year to work his Bass and Guitar magic with all the staff musicians. Joe performed regularly with the Pierre Schryer Band and the London Symphony Orchestra and tours with Jayme Stone’s Folklife;

Zach, Áine, and Benoit of The O’Schraves

Other evening events include Community Dances and the always entertaining Live Auction, slated for Thursday evening, August 16, which raises funds for the Nicholas Missere Bursary Fund, a fund that helps families and individuals take part in AlgomaTrad events and workshops.

Check out an evening schedule for events open to the public HERE.