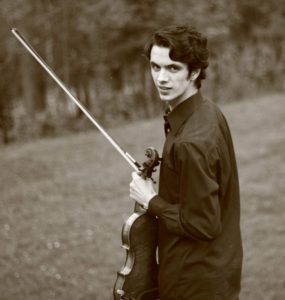 Tom Fitzgerald is a member of The Fitzgerald’s, (thefitzgeralds.net) a family band from Bancroft, Ontario that has released several recordings and tours extensively. He is accomplished on the fiddle, mandolin, guitar, and as a step dancer. Tom taught at AlgomaTrad 2015 and we are pleased to have him back this year.

Tom has toured professionally since he was 10 years old. A high point of his career was winning the title of 2012 Canadian Grand Master Fiddle Champion in Ottawa, ON, as a first-time competitor. Later that year he placed 5th in the US Grand Masters Championship in Nashville, TN. This past year, Tom became an official artist of D’Addario Canada. He has also performed alongside Natalie MacMaster, Leahy, Wayne Rostad, and appeared on the Tommy Hunter CBC special “Talk About the Good Times”.

Currently, Tom is studying at Humber College in Toronto, ON pursuing a degree in Jazz Violin. He is quickly making a transition from the music of his roots- Canadian Old-time Fiddling and Celtic Fiddling- to creating his own distinct sound and style. With a passion for improvisation, Tom incorporates elements of bluegrass, swing, blues, and jazz into his playing which allows him to effortlessly fit into almost any musical situation. He has begun to teach privately in the Toronto area as well and has been an instructor at several music camps across Canada, including the Leahy Music Camp for the past 4 years.