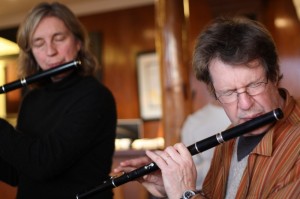 Andrea Cooper’s music has brought her from Eek, Alaska to Altamont NY. She was playing Irish flute with her 5-string banjo beside her when Mark first laid eyes on her (with his Irish flute and 5-string banjo in tow). Since that moment they have doubled the fun, playing two flutes, twin penny whistles, and double banjos from Vancouver to Cotuit. Mark and  Andrea  have taught together at Pinewoods camp and have performed regularly with the Pacific Northwest’s favorites, The Noodles. They have been part of the AlgomaTrad Staff in previous years, including offering their time as volunteers in 2012. We are happy to have them and their charming son, Fenton, back this year! 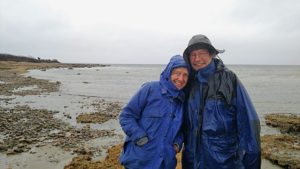 Mark Roberts plays traditional music on the flute, tin whistle, 5-string banjo and bouzouki. He toured and recorded with the seminal band Touchstone, played the banjo with the Red Clay Ramblers on Broadway in the show Fool Moon, his flute and pennywhistle can be heard in the Jon Sayles film The Secret of Roan Innish, and he’s brought his whistle on tour with Don Henley.

Mark has taught at several music camps including Swananoa Gathering, Augusta Heritage, and The Festival of American Fiddle Tunes. He’s performed on and produced many recordings, including The Gloup, a flute CD with guitarist Dan Compton, and Dyad’s first seminal recording.

Andrea Cooper can pinpoint the moment: It was 18 years ago when she unwittingly found herself spending an evening at the Tranzac in Toronto captivated by beautiful Irish music, particularly the flute, which she later learned was played by none other than Pat O’Gorman! Since then, her music has taken her to places as far as Eek, Alaska and San Juan Island, where she taught a beginning tin whistle class at the Friday Harbor Irish Music Camp for 4 years in a row. While living in Vancouver she co-hosted the session at the Irish Heather, a piece of it captured on the CBC recording “In the Heather”.

Somewhere along the way (most likely inspired by her mum), she also started frailing the 5-string banjo. In Seattle she taught clawhammer banjo to adults and at an after-school kids’ stringband class. She has earned a Music Together certificate, a program to teach music and movement to 0 to 5-year-olds with their caregivers.