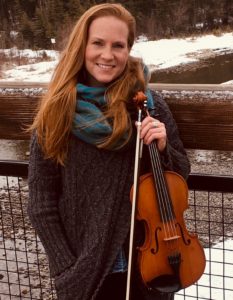 Born and raised on the densely rain-forested Sunshine Coast of British Columbia, Chelsea Sleep’s musical upbringing was fostered by the local youth fiddle association, the Coast String Fiddlers. Chelsea grew up performing for local Scottish Country dances and events, attended fiddle camps and workshops immersing herself in every style of fiddling she could get her hands on, and studied closely with prolific Canadian fiddler and composer, Oliver Schroer. She has taught at fiddle camps and workshops throughout British Columbia, Alberta and Ontario, and in remote towns in Northern Canada. She has become a well-known advocate for teaching Schroer’s music, and being exceptionally gifted working with young children, beginners of all ages, and arranging music for large group ensembles. Chelsea was the well-loved Musical Director for Bad to the Bow Youth Fiddlers in Gibsons for 15 years. In 2016 she moved into the Rocky Mountains to Canmore, Alberta, where she is now building a quickly-expanding new community of enthusiastic new fiddlers. 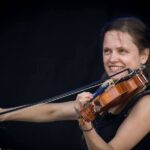 Kerry Fitzgerald is a fiddler and step dancer originally from Bancroft, ON, Canada, now based in Toronto. Her musical roots are Ottawa-Valley fiddling and step dancing. She has also explored various Celtic and folk styles. Most recently, Kerry is pushing the boundaries of Celtic music with her solo “electro-fiddle” fusion project Fiddle Beatz, where she writes, arranges, and produces electronic arrangements of original fiddle tunes. She released her debut Fiddle Beatz album in May 2018, and most recent singles,Think You Know and Beauty&The Beatz in 2020. Read more about Kerry! 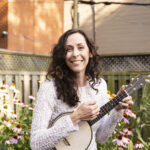 A singer and multi-instrumentalist, Hannah Naiman plays clawhammer banjo, fiddle, ukelele and guitar.  Her work as a singer/songwriter earned her the Canadian Folk Music Award for Traditional Singer of the Year (2017).   Hannah’s voice has appeared on many children’s albums: Hannah’s first children’s album, “Savez-vous plantez des choux?” (2002) was distributed to more than 10,000 babies across Ontario as part of the Early Years Literacy Kit. “Here We Go Zodeo”, an album recorded with Kathy Reid-Naiman, was nominated for a Canadian Folk Music Award, and a SiriusXM Indie Award, and was awarded a 2012 Parents’ Choice Gold Award. Read more about Hannah! 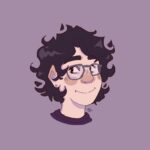 Eloise Phillips is a visual artist and musician based in London, Ontario. She sings and plays violin, guitar and ukulele. She is a student at H.B. Beal Secondary School, and a graduate of Lester B. Pearson School For The Arts. You can find her on Instagram as @possumscribbles. Eloise has attended the AlgomaTrad Family Camp for many years on her own and with her family. 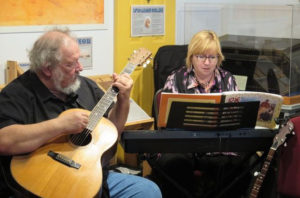 Ian Bell is a native of Waterford Ontario, a musician, visual artist, and former museum curator. As a folk musician, Ian Bell has performed across Canada and in the United States since the late 1970s On his own and with a number of groups, he has appeared at numerous folk festivals across Canada and abroad and for many years was a regular musical contributor to Stuart McLean’s Vinyl Café, Fresh Air and other CBC radio programs. Judy Moore plays piano, accordion and ukulele and worked for over 30 years as a classroom teacher and arts resource person with the Grand Erie District School Board. Ian and Judy organize the Crooked Stovepipe Folk Orchestra and connect singing groups. During Covid, they’ve been working from home to keep their musical pals connected and busy, as well as playing on the porch in good weather for their neighbours. 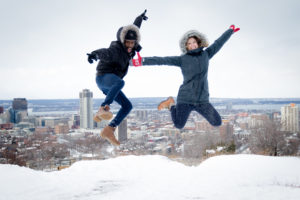 Josh Taylor is an award-winning dancer and choreographer, with a love of many styles of dance, namely Hip-Hop, Street Dance, Latin Dance and Ballroom Dance. He is the Owner and Artistic Director of Defining Movement Dance, in Hamilton, Ontario, where creativity, culture and community are the driving force. Josh is a self proclaimed Hip-Hop head, comic book geek, and foodie. Emilie Pickell is an elementary school educator, working in Brantford, Ontario. She has experience in Latin Dance styles, and has enjoyed dabbling in many other styles, especially partner dances. Emilie loves spending time with her family, silly dancing, and eating the food Josh makes.Josh and Emilie are married and reside together in Hamilton with their two cats. 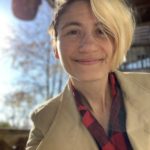 Reenie is a Toronto-based songwriter/composer, primarily writing for folk-pop duo Citizen Jane, as well as her solo project. She plays guitar, mandolin, and ukulele, and also loves photography, video editing, and singing songs to her cat. 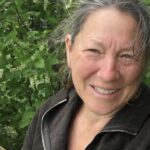 Julie Schryer grew up in a Franco-Ontarian home that was filled with traditional music and song.  She began playing piano in 1972. Having four brothers as fiddle players gave Julie ample opportunity to develop as a piano accompanist.  During her youth she played for hundreds of fiddle players at competitions and events throughout Ontario and the rest of Canada. Although her style of playing is unique, there have been key influential piano players along the way – including Violet Tulloch, Felix Dolan, Yvan Brault and Josephine Keegan.    As a family, Pat, Julie, her two sons, Zach and Benoit, and Áine (Pat and Julie’s daughter) play concerts, dances, and events  as “The O’Schraves”.  Julie is a founder and administrator of AlgomaTrad. Read more about Julie! 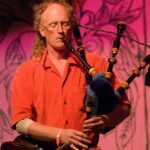 Pat O’Gorman began playing bagpipes 53 years ago in the Ontario Highland Piping world and has studied traditional music in Ireland, Brittany and Cape Breton. He has been playing traditional music on wooden concert (Irish) flute for over 40 years and plays Irish Uilleann pipes and whistles as well. Pat has been at the cutting edge of Canadian Trad/Celtic music for 40 years with Na Cabarfeidh, Rare Air, Morgaine Le Fay, Windbags, and  with The Brian Pickell Band. He performs regularly with his family band “The O’Schraves” (the O’Gorman/Schryer/Lefebvre Family). He has lived in the Algoma region for 18 years and is a founder and artistic director, with Julie Schryer, of AlgomaTrad. Read more about Pat!