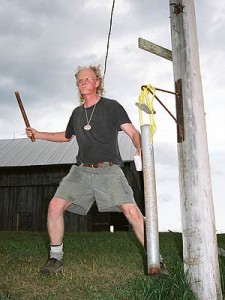 Ringing the bell for Gathering…announcement time!!!

Pat O’Gorman (pipes, whistle, flute) began playing bagpipes 55 years ago in the Ontario Highland Piping world and has studied traditional music in Ireland, Brittany and Cape Breton. He has been playing traditional music on wooden concert (Irish) flute for over 40 years and plays Irish Uilleann pipes and whistles as well. Pat has been at the cutting edge of Canadian Trad/Celtic music for 40 years with  Na Cabarfeidh, Rare Air, Morgaine Le Fay, Windbags, and with The Brian Pickell Band. He performs regularly with his family band “The O’Schraves” (the O’Gorman/Schryer/Lefebvre Family), which was awarded best new emerging group by liveireland.com and best new group by the Chicago Irish Times for their 2014 release “Family Day”. He has toured throughout North America and Europe, has appeared on over 30 recordings, and has been recorded for numerous television and radio programs and for several films including Canadian features “Men with Brooms” and the 2009 release “One Week”.  Pat has taught at the Goderich Celtic College, the North American Comhaltas Conference, the Boston College Gaelic Roots Week, Chris Norman’s Boxwood Flute Week in Lunenburg, NS, and the Northwest Fiddle Fest in Smithers, BC. He acted both as Chair and instructor for many years at the Chris Langan Irish Traditional Music Weekend in Toronto. Pat has played ceili and contra dances for many years throughout Ontario and Michigan. He has lived in the Algoma region for 20 years and is a founder and artistic director, with Julie Schryer, of AlgomaTrad.