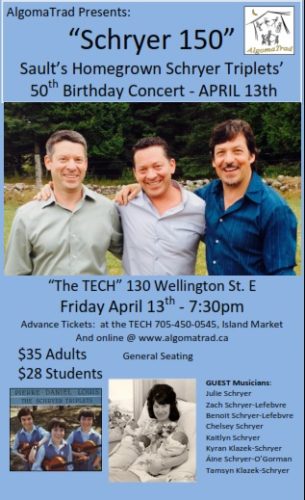 The Schryer 150 show is now sold out. Thank you for your interest!

Sault Ste. Marie’s own fiddling Schryer Triplets turn 50 on April 13th, 2018 so brace yourselves for a “Schryer 150” concert/birthday celebration. On Friday, April 13th, AlgomaTrad will present the Schryer Triplets, along with their sister Julie and several of their grown-up children, in concert at The Tech, 130 Wellington St. East, at 7:30 pm. THIS SHOW IS NOW SOLD OUT.

Louis, Pierre and Daniel grew up in a Franco-Ontarian home with their parents Julien and Juliette and older siblings, Patrick, Raymond and Julie.  The home was scene to countless house parties and gatherings where fiddling, song, and great food were found in abundance. Older brother Raymond was the first to start playing fiddle, and it seemed natural that the triplets would follow suit. There was a need for a piano player in the house, so big sister Julie became the supportive accompanist for many years of tune playing, competitions, and concerts all across the province and country. Early local influences were well-known fiddlers Bud Schryer, the triplets’ uncle, as well as René Coté. The whole family also studied with locally-influential music teachers Ed and Katherine Gartshore as well as at the Algoma Conservatory of Music. On top of all these important Sault connections, the concert will occur at The Tech, formerly Lakeway Collegiate where the triplets went to high school. 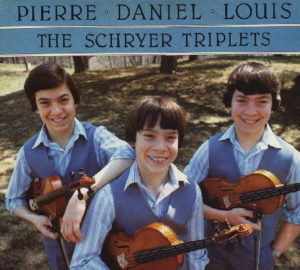 There were many prizes won by Louis, Pierre and Daniel from 1978 until they retired from fiddle competition, including 9 Canadian Open championships and 5 Canadian Grand Master Championships among a veritable avalanche of regional and national awards. The triplets were featured on the Tommy Hunter Show several times, and they recorded several albums with sister Julie on piano, the first in 1982 when they were 14 years old.  All three have continued their involvement in the world of fiddling, from concert stage to numerous eponymous recordings, and from judging fiddle contests to teaching new generations of great Canadian fiddlers. In 2016, the Pembroke, Ontario Fiddle and Stepdance Contest 40th Anniversary Concert audience roared with approval as they experienced an explosive performance by the Triplets and Julie, the first public collaboration of this seasoned and talented family in years. 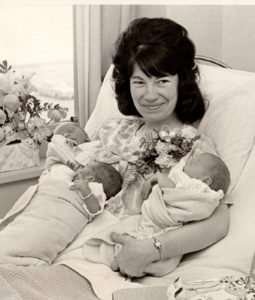 The triplets began their non-musical careers and started their families in the 1990’s but all continued to play music – for Pierre it became his career. Reunions and concerts together were and are always very powerful. Sibling connection through music is difficult to describe but the experience is certainly special, intuitive, and exciting. Every second Christmas, the family gathers at Julien and Juliette’s home in Sault Ste. Marie to celebrate together and now, with their grown up children who play and stepdance, the house is filled to the brim with  music and dance. Julie Schryer and Pat O’Gorman, founders and artistic directors of AlgomaTrad, suggested the idea of hosting this landmark concert in the triplets’ hometown exactly on their 50th birthday and the Triplets agreed. A reception will be held in Santini’s, adjacent to The Tech Theatre, after the concert for those wanting to re-connect or offer their best wishes.

Come be a part of Canadian cultural history in the making…and enjoy a performance that will be inspiring and FUN. This is truly a once in a lifetime experience – don’t miss it, seating is limited!