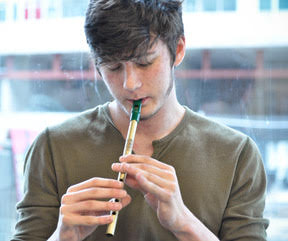 Eli Howard was first introduced to Irish traditional music at age five, when his school teacher began running tin whistle lessons at his elementary school. Eli quickly developed an obsession with traditional music which, since then, has led him to live in Ireland for an extended period, attend AlgomaTrad music camp for thirteen summers, as well as various other enriching musical experiences. Throughout the years Eli has had the privilege to study with a number of incredible tin whistle players and flautists, including Loretto Reid, Karen Light, Pat O’Gorman, John Skelton, Joannie Madden, John Kelly, and Mary Bergin. Eli does not currently perform in an organised or professional fashion as he is working towards a BA in political science at University of King’s College/Dalhousie in Halifax but can be regularly found playing at local pub sessions wherever he is located.