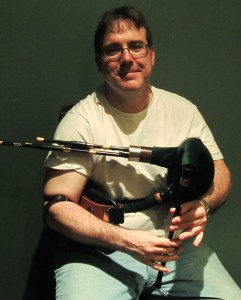 Paul McClelland spent decades on the Ontario highland games circuit in bands, solos and as an adjudicator. He competed with the Town of Newmarket Pipe Band (Grade 2), Clan MacFarlane Pipe Band (Grade 1), and was Pipe Major of the Capercaillie Pipe Band (Grade 3).  Moving to Scotland, Paul continued to compete as a soloist around the highland games in the far north of Scotland and studied privately with the late Pipe Major John D. Burgess.  Now back in Canada, he has given up competition but continues to teach and play.  Paul’s interests also include bellows pipes, whistles, bodhran, and button-key melodeon.

Paul is a long-time volunteer staff member at AlgomaTrad….thank you Paul!!