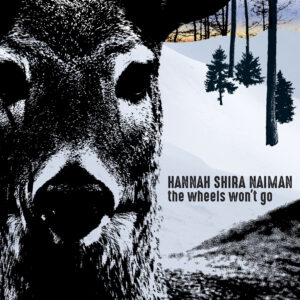 AlgomaTrad is pleased to present Hannah Shira Naiman in a series of concerts to celebrate her new CD “The Wheels Won’t Go” on Thursday, December 08, at Pier Seventeen in Blind River and on Friday, December 09, 7:30PM at the Old Town Hall, Richards Landing. Hannah will be accompanied by Nathan Smith of Vinta and The Barrel Boys – who can forget their gorgeous harmonies at the 2022 AlgomaTrad Staff Concert! Tickets for either show are $25 or $20/Seniors and Students, children 12&under free. Tickets are also available at Pier Seventeen, Blind River, or the Black Bear Cafe, Richards Landing.

The festivities continue at the Old Town Hall in Richards Landing on Saturday, December 09 with a Children’s Concert by Hannah on Saturday morning, 10:30AM. Nathan will be offering workshops, details to be announced on this website and AlgomaTrad Facebook and Instagram pages. An AlgomaTrad Community Dance will follow these events, with Hannah calling and Nathan and Julie Schryer providing the music. Admission to all Saturday events by donation. 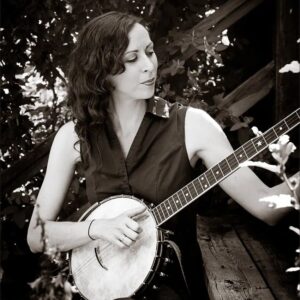 Honoured with Traditional Singer of the Year at the 2016 Canadian Folk Music Awards for her album Know the Mountain, Hannah Shira Naiman combines her powerful songwriting and impressive musicianship to deliver exciting contemporary versions of the traditional music she was raised on.

Hannah has travelled coast to coast in Canada and the US promoting Know the Mountain and her debut album, Tether My Heart (2013). Since moving to Northern Ontario four years ago, she has continued to develop her songwriting with support from the Ontario Arts Council, and grown her career as a children’s musician and music educator.

This fall, Hannah released her long-awaited third full-length album, The Wheels Won’t Go; featuring songs inspired by her move from Toronto to northern Ontario, the COVID pandemic, and her experience of new motherhood. Whether performing in concert, penning a murder ballad, or calling a square dance, Hannah is uniquely positioned to make a lasting mark on the Canadian music landscape. 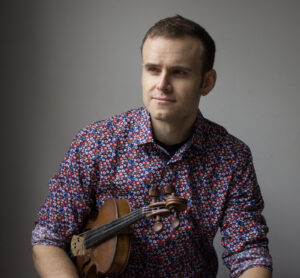 Originally from North Bay, ON, Nathan Smith is a fiddle player and singer-songwriter whose upbeat and soulful original songs and fiddle tunes combine a deep wealth of experience playing bluegrass and old-time music with a lifetime of playing traditional Canadian fiddle. Nathan’s main touring acts include CFMA-nominated bluegrass/roots powerhouse The Barrel Boys and dynamic trad supergroup Vinta. He is also in demand as a sideman and session player. Nathan’s 2020 debut album “Let it Rest, Let it Rise” showcases a diverse array of compositions inspired by family, community, and the Northern landscape.