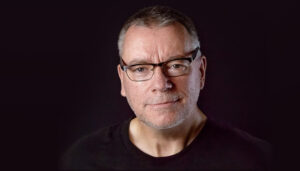 Steáfán was born and raised in Belfast, Northern Ireland and moved to Canada 14 years ago with his wife Saskia and 3 children Oisin, Eile and Ayisha. He has played on or produced over 200 albums, toured in over 30 countries and has a recording studio and a collection of over 800 musical instruments. He is the author of “The Bodhran Book” and “The Low Whistle Book”, both best sellers in their genre. He and his family also formed a band called Clan Hannigan. Steáfán composed the music for a 24-episode animated series which aired worldwide in 2015, worked with a diverse range of artists including Bjork, Depeche Mode, Loreena McKennitt and AfroCelts He has also appeared on MTV, BBC and CBC. Along with his wife Saskia, he was hired to work on developing the hit theatre show “Come from Away”.

Steáfán has a background in theatre in which he has held many positions: Technical Director, Musical Director, Head of Props, Head Carpenter, Lighting Designer, Sound Designer, and actor. He has worked as a Technical Director for many companies including Jumblies Theatre, Education Arts Canada, Festival Players, and the Port Dover/Port Colborne Lighthouse Festival. He was the sound design engineer for the Thinking Rock Community Arts performance of Gigidoowag Ziibiik/The Rivers Speak Community Play , a production that enlisted the help of AlgomaTrad to provide musical direction and was performed at the Mississagi First Nations Pow-Wow Grounds in 2017.

And yes rumours are true, Steáfán arranged music for and appeared on the hit T.V. series “Friends” – the one with Ross’s wedding, acted in Canadian show “Coppers”, and been a session musician on “Black Harbour”, “Relic Hunter ” and “Earth Final Conflict”.