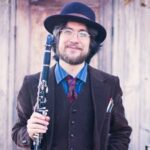 John David Williams is a Toronto based clarinetist. After studying classical music with the late world renowned clarinetist Avrahm Galper and at the University of Toronto, John began his own exploration of improvisation, composition, and various folk traditions of the clarinet: traditional jazz, klezmer, and a variety of different European music styles. He has played mostly with Lemon Bucket Orkestra, Jaron Freeman-Fox and the Opposite of Everything, his duo with Emilyn Stam, and his own band The Boxcar Boys. He has performed in China, Australia, throughout Europe, USA, and across Canada and can be heard on many acclaimed and award winning recordings (including LBO’s Juno nominated albums Lume, Lume and Moorka, The Opposites’ CFMA winning self-titled album, and three releases that predominately feature his own compositions by The Boxcar Boys).

John is currently recording and performing with Vinta, whose members will all be part of AlgomaTrad Camp 2022.