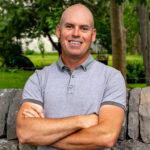 Andre Lemieux is a dry stone waller and stonemason. After completing diploma programs in both heritage carpentry and stonemasonry, he began his career working on federal restoration projects all the while taking any opportunity to practice the craft of dry stone walling. Travelling to Europe on several occasions to work alongside master craftsmen and attending stone working symposiums provided hands-on education in dry stone walling. 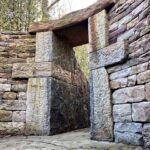 Since then he has completed instructor training and achieved professional certification with the Dry Stone Walling Association of Great Britain and been involved in many dry stone walling projects including two large scale land art installations, the restoration of Opus 40, unique garden features and countless meters of traditional walling.  As president of Dry Stone Canada from 2014 – 2016 he worked with other board members to organize a successful 2015 dry stone festival on Amherst Island and several hands on workshops.