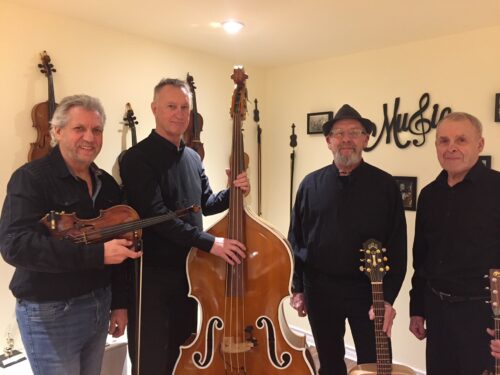 Schryer Country is a an old-time country music group from Sault Ste. Marie and the North Shore who have been performing their brand of music up and down the Line for years and have a devoted following. Brothers Henry (guitar and vocals) and Ed Schryer (guitar, mandolin, vocals),  are joined by their nephew Ron Schryer (fiddle) and their good friend Bill Pateman (bass, guitar, vocals) to produce a sound that is something old and something new, something borrowed and something blue! They have all been playing music all their lives – Ron’s dad was the infamous Uncle Bud Schryer, known for dances and gigs in the Sault and at the Dew Drop Inn on St. Joseph Island from the 40s through the 70s. Ed and Henry grew up in a large family that liked nothing better then to pull out guitars at a party and share favourite songs, many of them old country but some traditional French-Canadian songs in the mix. Bill Pateman simply plays and sings the music he loves, and has lead eponymous groups featuring his son Archie Pateman and local violinist Sheldon Jaaskelainen. These guys like to jam, sharing ideas from a variety of music from gospel to bluegrass to old country songs.