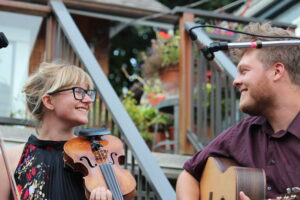 JUNO-nominated fiddler Elise Boeur ties together diverse influences with a deceptively light touch – her distinctive, silvery tone belongs to a world of its own. Whether deftly filling the role of fiddler, violist, or hardanger fiddle player in a wide variety of projects, or playing her own gleefully outfield, Nordic-influenced “imaginary folktunes”, her playing is unmistakable.

At age 14, her passion for Irish traditional music led her to travel to Ireland alone, studying Donegal fiddling and the Gaelic language along the north-west coast. In recent years, Boeur’s open ears have turned to the rich musical traditions of Scandinavia. Her love for Scandinavian folk music resulted in travels though the musical heartlands of Norway and Sweden, and an inspiring exploration of the sub-Arctic region of northern Norway.  Supported by a BC Arts Council Professional Development grant, she returned to Norway to study traditional Norwegian hardingfele and fiddle music under Ånon Egeland at the Høgskolen i Telemark college of folk arts in 2012. She has developed this music in adventurous duos with Norwegian multi-instrumentalist Michael Caplin, with New York bassist Nate Sabat, and with her Vancouver-based instrumental trio Marmota. Currently concentrating on her transatlantic prog-trad quintet Aerialists, Elise is joyfully exploring the reaches of contemporary folk music.

In 2013, Elise was the recipient of the full-ride Slaight Family Scholarship to Berklee College of Music in Boston. She graduated from the Performance program at Berklee in 2016, with a minor in American Roots Music. Elise now lives and works in Toronto, Ontario.

Adam Iredale-Gray is a Canadian JUNO nominated musician, producer, and recording engineer based in Toronto, Ontario and Mayne Island, BC. He is versatile fiddler, guitarist, and banjo player with deep roots in traditional music and a commitment to innovation. Nominated for a 2019 JUNO Award for Instrumental Album of the Year, he’s a compelling performer and an in-demand collaborator.

Adam studied at the Royal Conservatory of Music in Victoria, BC, and graduated from the Performance program at Berklee College of Music in 2015 with a minor in Music Theory.

Adam is a founding member of progressive folk bands Aerialists and Fish & Bird, and has produced albums for contemporary roots artists including Jenny Ritter, David Newberry, and Lula Wiles.