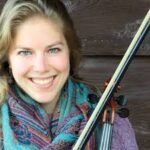 Cate Sandstrom is a prize-winning Traditional Irish Fiddler based in the New York area. She has a versatility that has enabled her to move seamlessly among several genres, which has guided her to her love of Irish music. She fell in love with traditional music in Canada, when first introduced to the O’Schraves, and then after that, AlgomaTrad. Cate spent seven weeks in Ireland in 2012 where she began playing Irish music. In addition to being classically trained, Cate studied several years with Brian Conway.

Cate teaches private lessons and performs in the North East and Canada. For the first few years of attending AlgomaTrad, Cate was a camper, and then she began teaching fiddle classes there. AlgomaTrad, The O’Schraves, and the community that is brought together around the camp and heritage arts center, continues to inspire Cate and she is thrilled to join again this year for the virtual camp.