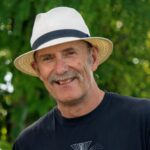 Self-described “singer and writer of old songs” and concertina player, Ian started singing English folk songs during the 1960s British folk scare. He emigrated to Ontario in 1970, gravitated to Toronto’s  Fiddler’s Green Coffeehouse and was an original member of The Friends of Fiddler’s Green. He moved to the Ottawa area in 1973, co-founded that city’s Old Sod Folk Music Society, and with harmony trio Finest Kind toured extensively across North America and in the UK. His most recent project is a transatlantic collaboration with English folk luminaries Jess and Rich Arrowsmith, the Arrowsmith:Robb Trio. In  2005, he was the recipient of the first Canadian Folk Music Award for “Best Traditional Singer”, for his recording with the band Jiig.