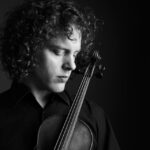 Duncan Cameron is a bilingual singer and multi-instrumentalist whose performances highlight the variety of traditional folk music from Ontario, Quebec, the East Coast, Ireland, Scotland, and beyond.

Duncan’s late father Stewart Cameron inspired Duncan with a deep appreciation for Scottish ballads and their ability to shed light on social issues. Like his father and sister Moira, Duncan learned to sing and play many instruments. His mother Dianne’s French Canadian heritage also inspired him and he grew enamoured of Québécois call and response songs and dance music.

The fiddle is Duncan’s first instrument, but he also plays mandolin, guitar, Irish bouzouki, tin whistle, harmonica, bodhrán and English concertina. His use of a looper and other technology to enhance his sound makes his solo shows unexpectedly rich in timbre and range. Along with his music, Duncan shares a sense of humour and a gentle and engaging manner with his listeners.

He has toured, recorded with, and composed music for many groups including The Pierre Schryer Band (Juno nominated in 2004), Fig For A Kiss (nominated for a Canadian Folk Music Award in 2006) and The Irish Descendants. He currently plays with his band Fagroongala, a Celtic trio who compose, arrange, and perform original and traditional music from Canada and the UK, in both French and English.

He is a recipient of the 2019 Jackie Washington Award for outstanding contributions to arts and culture in Northern Ontario, (Northern Lights Festival Boréal).

“Duncan is a living encyclopedia of traditional music, breathing new life into every song he plays. Not only is he a first-rate fiddler, but also a skilled singer, multi-instrumentalist and storyteller. He can switch seamlessly between mandolin, guitar, Irish bouzouki, tin whistle, harmonica, bodhrán and English concertina. He can tell you about the background of every song, and proves that traditional music is not static – it is alive and vibrant!” Max Merrifield, Executive/Artistic Director, Northern Lights Festival Boréal.

“Duncan Cameron is an outstanding musician and folklorist, story teller and raconteur.

His performances are rich and full of history. His newly composed tunes go beyond the present, drawing from his deep well of traditional music.

Duncan’s voice delivers the emotions of people long gone and of those sitting before him. In short, Duncan Cameron lives and breathes music, as honest as the earth.” Teilhard Frost, musician, promoter, artist.