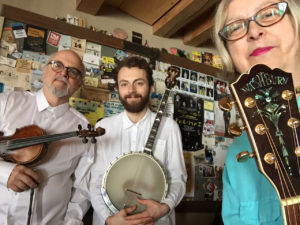 AlgomaTrad is pleased to announce a House Concert with Québécois trio ZIGUE, featuring AlgomaTrad Staff Alumni Claude Méthé and Dana Whittle, at Julie and Pat’s home near Desbarats on Thursday, August 1st, 7:30pm. Space is limited, so call 705 782 4311 or 705 257 6106 to reserve a seat. Cost is $20/adult. Children welcome.

Partners in music and marriage for 25+ years, and parents to the newest member of the group (Aimé Méthé), Claude Méthé (fiddle, vocals) and Dana Whittle (guitar, foot percussion, vocals) have lived, breathed, created and shared their music across Canada, the US and overseas. Dynamic singers and prolific composers, they are members in good standing of Québec’s living musical tradition. Claude’s evocative singing and authentic fiddling is matched by Dana’s rhythmic prowess, tasty guitar and sparkling vocals, and with the addition of Aimé (banjo, fiddle, vocals), they add some inspired, youthful creativity to their already-unique sound. Zigue delivers rootsy originals, archival gems and the kind of magic generated by musicians whose kids (Aimé included) napped onstage in instrument cases. Get ready for reels, jigs, complaintes, chansons à répondre, energized foot percussion and tales of life from their home deep in the heart of the Québec trad universe.

Born in Québec City, fiddler-singer Claude Méthé has been a part of the traditional music world in Québec for more than forty years. A self-taught fiddler, his style reflects his influences and the eighteen years he lived in the region of Lotbinière, on the south side of the St-Lawrence river not far from Québec City. Claude is a former founding member of the legendary Le Rêve du Diable, winner of a 1983 Felix for Trad Album of the Year, and a group often credited with single-handedly reviving public interest in traditional Québécois music. Claude is well-known for his work with other trad bands, including Manigance, Ni Sarpe Ni Branche, Entourloupe, Jeter le Pont and Dentdelion). He has played all over Canada, in Europe and the U.S. and appears on at least twelve recordings, including the soundtrack of Oscar-winning film “CRAC” by Frédéric Back. Claude’s impressive repertoire of traditional songs contains gems from Manitoba, Ontario, Québec and the Maritimes, sung in a voice both textured and sentimental. He is heir to the repertoire of his longtime mentor and friend Aimé Gagnon, who died in 1997. Claude now lives in the tiny village of Ste-Béatrix, in Lanaudière, the heart of what is arguably the hotbed of traditional Québécois music (it is home to La Bottine Souriante, Norouet, Les Charbonniers, Hommage aux Aînés, Festival Mémoire et Racines…). In 2012, Claude, as part of Le Rêve du Diable, was awarded the Québec National Assembly Medal of Honour for his contribution to the cultural identity of Québec. A composer, singer, guitarist, bassist and foot percussionist, Dana offers a taste of the unique cultural mélange of her New England folk roots and her experience as an American transplanted into the heart of the traditional Québécois music scene. Most often seen with band Dendelion, trio Mil, or fiddler Claude Méthé, she is a singer and composer in her own right; her original repertoire includes songs in English and in French. Her compositions are strongly influenced by the trad Québécois music she has played almost exclusively since the early ’90s; some can be heard in concert or on recordings by other artists, including Les Poules à Colin, Stéphane Landry, Cindy Mangsen & Steve Gillette and Robert Resnick. Born into a singing family, with a grandmother who sang in the New York Metropolitan Opera and recorded gospel 78s on the Okeh label, she began playing guitar at age six. At the age of 12, she toured New England with a childrens’ folk group. At university, she began performing her own songs as well as folk, blues and bluegrass at clubs, bars and coffeehouses throughout the upstate New York region. From 1973-1984 Dana performed solo and as a member of roots groups in New England, New York and Georgia, where she lived for 7 years. Beginning in 1985, she was a frequent backup guitarist and singer for Vermont folk-trad artists Elizabeth von Trapp and Patti Casey (VT). From 1990-1997, her deep friendship with late Vermont Franco-American singer Martha Pellerin and subsequent exposure to traditional Québécois music led to the formation of group Jeter le Pont and a successful performing career in both the U.S. and Canada, plus the release of two albums prior to Pellerin’s untimely death in 1997. Dana met Claude Méthé as a result of her friendship with Martha, and in 1994, Dentdelion was born as a duo with Méthé, later adding flutist Denise Levac, her daughter Béatrix Méthé and Denise’s son Colin Savoie-Levac (both members of award-winning band Les Poules à Colin). From 2006-2014 Dentdelion played concerts and toured together in Canada, the US and Europe, performing at countless festivals, concert halls and folk clubs, in addition to playing for contradances in both Canada and the US. After moving to Québec, Dana also performed and recorded with trad singer-stepdancer Tess LeBlanc (2000-2002). She founded the ensemble TradNation Project in 2012 and in addition to the ensemble’s performances, helps young trad artists to showcase under the flag of TradNation. Dana is founder and former president of Folquébec, Québec’s first organization dedicated to the international promotion of folk music made in Québec.