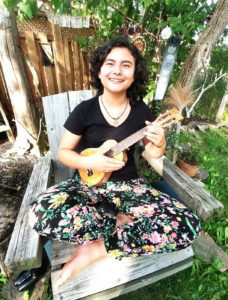 Eshel Hyatt is a multi-instrumentalist and composer from Callander, Ontario, Canada. As a six year old, Eshel began to compose simple melodies on her keyboard, drawn most to the sound of the church organ, which is still one of her favourite instruments today. Some of her earliest memories are of traditional music jam sessions at fiddle and step dance competitions throughout Ontario. Her sister was a regular step dancer on the circuit, and at the age of three Eshel, too would become a competitor in her respective category.

In 2011, shortly after leaving the competitive step dancing circuit, she developed an interest in the guitar, and began learning how to play it, under the guidance of her older sister, Ariel Hyatt. This led to the exploration of other instruments such as the ukulele, tinwhistle, and piano. At the age of eleven, she began participating in local recitals alongside her sister as accompaniment for the students of Samantha Depatie’s School of Fiddle and Step Dance.

Recently, Eshel has delved into the exploration of Eastern European, Balkan, and Nordic folk music. She enjoys experimenting with odd meters in her original compositions, which are heavily influenced by the Bulgarian tradition and hopes to continue on this path.In true multi-instrumentalist spirit, she plans on taking up many more instruments from all over the world.

Most recently, Eshel was a cast member in the TOROS music production’s ‘We Will Rock You’ and has discovered yet another branch of the musical expression she enjoys.