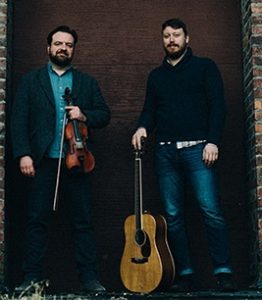 AlgomaTrad is pleased to present fiddler Ryan McKasson and guitarist and singer Eric MacDonald at the Richards Landing Old Town Hall on St. Joseph Island on Wednesday, May 09, at 7:30PM. We met Ryan in the fall of 2017 at the Hey Fever Contra Dance weekend in Ottawa and subsequently found out he was going to be on tour in the American Mid-West this spring. We knew we just had to get him up here – Ryan is fantastic fiddler, 1996 winner of the the US National Scottish Fiddle Championship, and we had an epic session with him and James Stephens in Ottawa back in November. Eric is a Berklee College of Music graduate who has been immersed in the traditional music world for years and performs and plays with some of today’s outstanding trad musicians (including The Outside Track, Mairi Rankin’s group…Mairi played an amazing AlgomaTrad concert last June with harpist Ailie Robertson.) You can hear some of Ryan and Eric’s music on Soundcloud HERE or check them out on YouTube HERE.

Tickets are $20 – Adult/  $12 – Student and are available online HERE or at the Island Market in Richards Landing.

Ryan McKasson and Eric McDonald are masters of tradition who purposefully explore the dark corners floating on its edges. The music this duo creates is to share, and live performance is the forte. Their mutual attitude stretches beyond the music. The two have been good friends ever since they met, and this is present in their live performances, which are full of organic banter and good humor to go along with the music. They create an environment of their own design, drawing in listeners without pretense. Despite both living active musical lives thousands of miles apart these two musicians have committed to working together to forge a new musical path.

Ryan McKasson has gained a strong reputation as a performer, composer, collaborator and teacher. In 1994, he began attending Alasdair Fraser’s Valley of the Moon Scottish Fiddling School (VOM), which led him deep into the world of traditional music. In 1996 he became the youngest ever to win the US National Scottish Fiddle Championship and in 1997 he was awarded a Merit Scholarship for Viola Performance from the University of Southern California, where he studied with Donald McInnes. Ryan’s professional career took a step forward in 2004 when he spearheaded the formation and development of “The McKassons”. This group released two critically acclaimed albums, Tall Tales (2004) and Tripping Maggie (2006). Over the years Ryan has recorded with a number of influential artists, namely his playing appears on fellow Scottish fiddle champion Hanneke Cassel’s three albumsSilver (2006), For Reasons Unseen (2009), and Dot the Dragon’s Eyes (2013), as well as Alasdair Fraser & Natalie Haas’s recording Highlander’s Farewell (2011). In addition to McKasson & McDonald, other current projects include MAC, Ensemble Galilei and The Syncopaths.

Eric McDonald found his way to traditional music through the rich local music scene in his hometown Boston. Nearly a decade after studying at Berklee College of Music under world renowned musicians such as guitarist/mandolinist John McGann and cellist Eugene Friesen, he is now established as one of the USA’s premier accompanists in many styles. Eric cut his teeth playing for contra dances in New England, and can still often be seen from the dance floor. Nowadays he is an active session player, regularly recording and traveling with musicians of many stripes. Touring credits include The Outside Track, Andrea Beaton, Wendy MacIsaac and Katie McNally. In addition to McKasson & McDonald, he can currently be seen touring with the lively trio Daymark, Scottish powerhouse Cantrip, and award winning singer/songwriter Connor Garvey. In addition to guitar accompaniment, Eric’s debut solo album Rove features his unique style and approach to tunes on the mandolin, as well as carefully crafted deliveries of traditional ballads on voice and guitar.