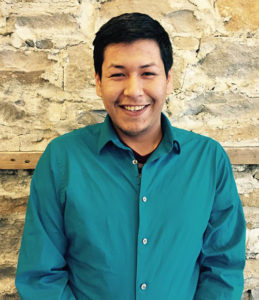 Hello I’m Jamie–lee Oshkabewisens. I hail from Wikwemikong Unceded Indian Reserve, on Manitoulin Island, Ontario. I’ve been in plays with Debajehmujig Creation Centre – playing the protagonist in “Nanabush Steals the Fire”, which was performed to the Aundeck Omni Kaning First Nation (Sucker Creek) preschoolers, as well as “12” (12 days of Christmas 2014) & “Spirit of the North” (2013), both staged at the Debajehmujig Creation Centre in Wiki. I’ve also had the honour to be a part of the Debajehmujig production “Global Savages” (2015).

I take part in an annual “Wilder Med Scenarios” with the Northern Ontario School of Medicine (N.O.S.O.M). I’ve participated in an Arts Educator Foundations workshop with the Royal Conservatory of Music & Debajehmujig Theatre Company as well as the Heritage Interpreter workshop. I traveled with the tour “Train of Thought Canada” with Jumblies Theatre, for which I am currently employed as an intern thanks to funding from MIZIWE BIIK. I acted as assistant director for the Thinking Rock Community Arts 2017 production “The Rivers Speak”, staged at the Mississagi First Nations Pow Wow grounds just outside of Blind River.  I am now a freelance artist after 8 years with Debajehmujig, currently working on my own projects for future endeavours. I  reside in the heart of Wikwemikong Unceded Indian Reserve on beautiful Manitoulin Island Ontario, Canada.