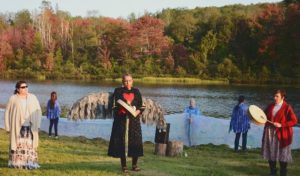 Thunderbird Woman (Nimkii Beneshay Kwe) and companions, the River Puppet, and the River!

The final magical performance of Thinking Rock Community Arts production “The Rivers Speak” occurred on Saturday, September 16…the final performance of seven that occurred over 2 weeks starting from September 7. The play featured a cast of 40 community members as well as a dozen musicians and a production staff of 15 or so dedicated professionals. The play itself brought together local Algoma stories, some from the Settler community and some from the First Nations community, and blended them into an experience that brought these two communities together to create art that transcended differences and lead to new understandings. 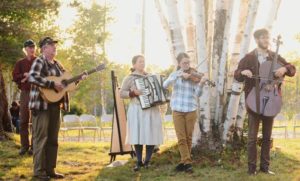 James Stephens and members of The O’Schraves.

AlgomaTrad played a huge part in the building of this community play over the last 4 years – much of the music for the play was originally workshopped and developed at AlgomaTrad 2015, 16, and 17. In 2016, AlgomaTrad and co-applicant Thinking Rock  were awarded a Canada Council for the Arts – Collaboration in Music Program grant to develop music for the play, leading to the hiring of the amazing James Stephens as musical director. James also composed some of the music. Though many AlgomaTrad Campers took part in the workshops at camp, the production ended up featuring Julie Schryer, Áine Schryer-O’Gorman, Pat O’Gorman, Zachary Lefebvre, and Gina Marie Wilson from 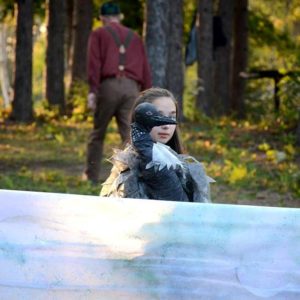 AlgomaTrad and The O’Schraves. Aside from providing music specific to different scenes, this group also accompanied the featured singers for the production: First Nations Elder, singer and drummer Marly Day, Métis singer and drummer Kathy Robitaille, and singer Kimberley Arnold from Elliott Lake. The blending of the two worlds of Settler Traditional Musicians and First Nations Singers was new to all of us, an experiment that resulted in music that was beautiful, profound and very moving for performer and audience alike. It was a pleasure to meet new friends, percussionist Marcel Jacques and his daughter, both of whom joined the music on several scenes during the play as well as performing in the River Chorus. 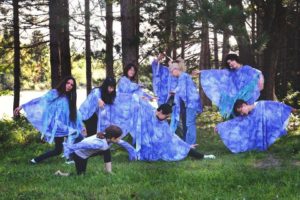 We here at AlgomaTrad would like to thank first and foremost Thinking Rock’s Artistic Director Robin Sutherland, whose vision shaped the whole production and whose continual hard work made it happen. There are so many people to thank who brought this very moving and very profound story to life: Robin’s right hand (and left hand) TRCA partner and general manager Miranda Bouchard; the entire production team, too many to name here, but all wonderful people who brought incredible ability, passion, and expertise with them and gave, gave, gave; 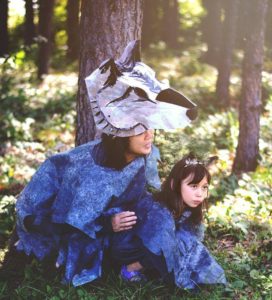 to all the community performers, your enthusiasm and courage were an inspiration;  and finally to the Elders and Community of Mississaugi First Nations who shared so much of their wisdom, teachings, and good humour, as well as their sacred space – without them this magic could not have happened. We all learned sooooo much!

The Rivers Speak performance was filmed on the second last night of the run and plans are underway to release a film. Preliminary discussions have also been made around producing a recording of the music in the play. So stay tuned folks, if you missed it live you may be able to capture some of the magic at a later date…though we have to say that you were very lucky if you were one of the 600 or so audience members who were able to experience live this once in a lifetime production! 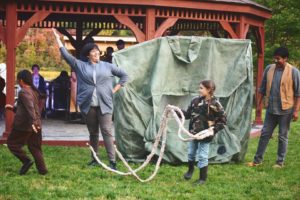