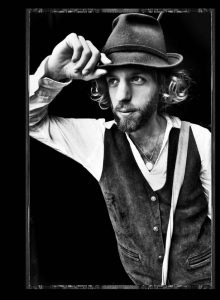 Adam Dobres (www.adamdobres.com) is a highly accomplished guitarist with a natural ability to embody any style of music. He is equally at home with Bluegrass, Celtic, Jazz, Country, Folk, Old Time, Rock and Blues, and more. His love of the electric and acoustic guitar has taken him around the globe, performing throughout North America, Europe, Australia, and New Zealand. With a taste for experimenting with personal style and a love of touring, Adam has embarked on living his dream. From playing Celtic music with some of Canada’s finest fiddle players including Daniel Lapp and Pierre Schryer, Adam has branched out to Pop Rock with Grammy Nominee Toni Childs (including an Australian tour were they opened for the legendary Jackson Brown), performed with renowned musicians playing exotic instruments such as the Sitar, Turkish Lira and African Kora, and toured North America with Old Time string band Outlaw Social. Adam was part of The Dustin Bentall outfit when they performed as part of the 2010 Winter Olympics and supported Blue Rodeo on their 2010 Canadian tour. In 2011, Adam joined the Ruth Moody Band, a dynamic female vocalist who has embarked on a successful solo career. The band has toured Europe, Canada and the US. and are working on a new album. Adam also enjoys the recording process and was thrilled to be musical engineer and producer for an important and meaningful project with Sarah Van Borek in creating the “One Voice” video. The video was created as part of the SFU Public Square “Alone Together” conference focused on bridging the gap of cultural isolation and disconnection within the Vancouver community. Adam recently released his self-titled, first solo album – an eclectic mix of his own compositions revealing his many influences and his absolute grace and superb versatility on the guitar.