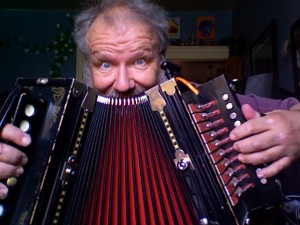 Ian Bell is a native of Waterford Ontario, a musician, visual artist, and former museum curator.

As a folk musician, Ian Bell has performed across Canada and in the United States since the late 1970s On his own and with a number of groups, he has appeared at numerous folk festivals across Canada and abroad and for many years was a regular musical contributor to Stuart McLean’s Vinyl Café, Fresh Air and other CBC radio programs.

Following the release of three CDs of original material, Ian has created two recordings of traditional songs and tunes – My Pious Friends & Drunken Companions and his latest, Forget Me Not When Far Away – a collection of songs of the Great Lakes. Ian’s latest CD is a just-released live collection of songs and stories, Saturday Night In Villa Nova.

Ian plays guitar, banjo, button accordion and a host of other instruments.