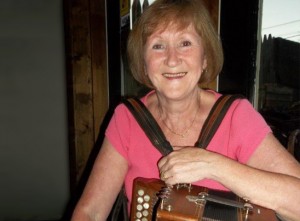 Ena O’Brien hails from an area that is a hotbed of traditional music in East Galway, Ireland and has played accordion since she was a wee girl. Her older brother, Joe, was an accordionist and the renowned accordion player Joe Burke was a neighbour. Ena moved to Canada in the early 60’s and was soon playing professionally with a folk/traditional group, a gig that lasted for about seven years, with gigs throughout Canada, including the North West Territories, and the United States. Her 2 children Ciara and Ruari grew up in a home filled with music and both became champion Irish stepdancers. As her children grew, Ena continued to be involved with Irish traditional music, playing for Irish Dancing competitions across Canada and the US, helping to found a Toronto branch of Comhaltas Ceoltóirí Éireann, the international Irish music association, as well as teaching music from her home and at Comhaltas conventions. 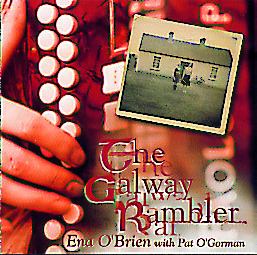 In 1999, Ena recorded the CD “The Galway Rambler” with her good friend Pat O’Gorman on flute, a musical partnership that started on a Comhaltas bus trip to Buffalo in 1981 – the tune was “The Yellow Tinker”. Ena was invited back to Ireland in 2013 to perform at the Tuam Traditional Music Festival for the “Gathering”. This was a project put forward by the Irish Government to encourage emigrants to return home to Ireland for a visit. Ena continues to play for dances and sessions around Toronto and Southern Ontario and also provides music for Irish Stepdance contests throughout North America.