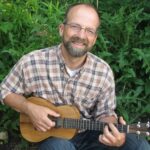 Charlie Cares (vocals, ukulele, whistle, percussion) is a singer of traditional songs who grew up in Ann Arbor, Michigan. During his university years he was a vocalist in Ars Musica, a well-respected early music ensemble notable as one of the first period instrument ensembles in North America. After graduating he began performing weekly at the Freighthouse in nearby Ypsilanti with Gypsy Cab, and later as lead singer in Mulligan Stew, touring extensively in Michigan, Indiana and Ohio. In the 1990s Charlie relocated to Toronto, where, with Alex Sinclair and Anne Lindsay, he formed Heartwood, appearing at numerous music festivals (Summerfolk, Home County, Red Rock, Mémoire et Racines) and receiving significant airplay on CBC Radio.

Charlie was the creator and Artistic Director of the Paris Plains Concert Series and Weekend in Paris festival (Paris, ON) where many fine traditional performers were showcased – among them AlgomaTrad organisers Julie Schryer and Pat O’Gorman and staff regular Brian Pickell. From 2005 to 2012 Charlie ran Ground Floor Music, a roots music CD shop based in Guelph that garnered recognition as one of the best record stores in Canada.

These days Charlie primarily plays solo, accompanying himself on tenor ukulele. He regards traditional song as essentially an aesthetic, rather than a static body of songs that happen to have survived. Accordingly, the repertoire he performs is a mixture of old and new, songs in English from North America, Ireland, Scotland and England, plus a few odds and ends from further afield. He approaches the arrangement of each song on its own terms, frequently employing open or modal tunings, and strumming, fingerpicking, or picking out a melody flatpick-style, according to the feel of the material. His primary interest is songs that tell a story, a story worth telling, and telling it well.

Charlie was an instructor at the first and second AlgomaTrad Family Camps, and we are pleased to have him return to AlgomaTrad 2015!