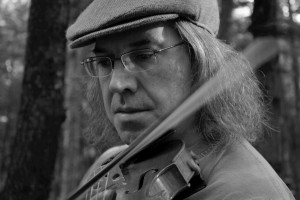 Richard Forest, from Montreal, has consistently thrilled and delighted audiences with the irresistible, inspiring and joyful music of Quebec. Having cut his teeth in the days of Quebec nationalism, he hasn’t stopped inspiring pride with music that expresses the rich emotive and joyful history of Quebec.
While there was fiddle music at his family’s home in Lanaudiere, it wasn’t until his late teens that he started to play. While his sister was at work, he borrowed her new fiddle and taught himself the tunes which had moved him as a child. Isadore Soucy, Joe Bouchard, Marcel Messervier and Philippe Bruneau figure prominently among those who have inspired his playing.
More than 30 years later, Richard is still a mainstay of the traditional music scene, well known for his compositions and highly sought after for dances. His tunes are often mistakenly labeled ‘traditional’ and can often be heard in sessions. Four are published in the Portland collections in league with the Irish, Scottish and Old time tunes that have endured hundreds of years and are still regularly played at dances.
He has played and recorded with Tradi-Son, Bardi-Barda, Domino, La Grande Chaîne, Rapetipetam and on June 10, 2013 he released a third CD with Réveillons!
He is in constant demand, has toured with bands and dance troops and now spends his summers teaching or playing at fiddle camps, dance camps and festivals.