First, we should let you know about the first AlgomaTrad dance of 2014…this coming Friday, January 3, 7:30PM, Legion Hall, Richards Landing, with The O’Schraves providing the music and the wonderful DAN GORNO on hand to call. Admission is at the door…$10, $5/12 and under, 5 and under free. Dan will take newcomers through some of the basics starting at 7:30, and we’ll get her revved up at 8pm.

The O’Schraves recently released their first CD “Family Day“, and we’ve been getting quite a few out into the world and getting wonderful feedback…if you want to know more or purchase a CD, please click HERE.

Julie and Pat spent the beginning of November recording a new Brian Pickell CD, which will be out in the spring of 2014. AlgomaTrad will hold a CD release or two for this brand new recording later this year. Stay tuned for that. 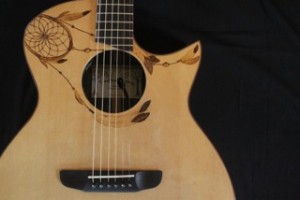 Zach’s guitar making is going strong, he’s got 4 orders on the go and the guitars are coming out as lovely, meticulous, and beautiful sounding as one would expect if you knew Zach. If you are interested in taking a look, visit him at Treehouseguitars.com.

Benoit and Zach did a 6-week cross-Canada tour with their folk trio, Wildwood Soul, with singer/songwriter Lorissa Scriven in May (and tour manager Hollie McHale, of course). Lorissa, originally from BC, is now part of the household here at AlgomaTrad central, and the trio is plotting more musical magic in 2014.

Benoit’s killer dance band, Ladies Chain, with Eli Howard and Colin Savoie-Levac, ripped it up at the Toronto Country Dancers Contradance in November. The band has been invited to play at the New England Folk Festival, April 25-27 (why that’s the same weekend Pat and Julie are on tour with Brian…who’s gonna look after the farm!!!)…look out New England!

So Folks, looks like 2014 is gonna be busy too. Plans are starting to develop as well for the AlgomaTrad 2014 Camp…can’t say much now but we will be in touch as soon as we have any info!

May you all have a wonderful year of music and art.