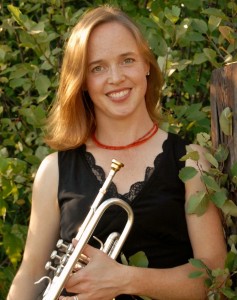 Canadian Trumpeter Merrie Klazek is active as a performer, teacher and recording artist in orchestral, chamber, solo, traditional and popular music. She holds a BMus from her native Calgary, where she studied with Howard Engstrom, and an MMus from Northwestern where she studied with the late Vincent Cichowicz. Her musical travels have taken her around the globe with performance highlights including the Spoleto Festival Italy, Musik Contemporaire Strasbourg France, Tokyo’s Bunka Kaikan hall, Stratford Festival, Hungary’s Niyrbator Festival, ITG 2008 “A Night of Principals”, the International Women’s Brass Conference 2010, 2012 where she placed 2nd in the solo competition, and over 30 solo appearances with various Canadian orchestras . Merrie has been principal trumpet with the Thunder Bay Symphony since 1999 and has held the same position with the Victoria Symphony (2005/06) and Orchestra London Canada (1996-99.) She has performed in the trumpet sections of over 10 of Canada’s top orchestras and teaches trumpet, performance and musicianship skills, and conducts the Wind Ensemble at Lakehead University in Thunder Bay. Merrie’s students have gone on to fulfilling careers in music. Merrie’s solo recording entitled “Songs to the Moon” has been featured on TVO Studio 2 and CBC Radio. She appears on numerous other recordings including four JUNO nominated CDs. Versatile in a variety of styles, Merrie enjoys improvisation and creativity in her musical endeavors and has been known to sing Brazilian tunes, call ceilidh dances, jam with her kids, and also performs around the continent with her husband, renowned Canadian Celtic fiddler Pierre Schryer