“AlgomaTrad Presents” three Algoma area concerts and one kid’s show  by Sheesham and Lotus (www.sheeshamandlotus.com), an old-time music duo from Kingston, Ontario who have played festivals, concerts, and dances across North America and Europe, including a gig for Via Rail playing music on the train from Toronto to Vancouver.  Masters of old-time fiddle and banjo, Sheesham and Lotus also play jaw harps, ham-bone percussion and home-made bass harmonicas in the ragtime and mountain style.  Dressed sharply in the old style, they appear as if they are from the very old days themselves. 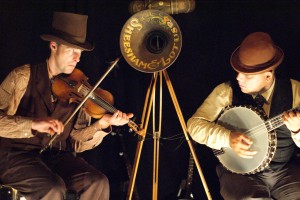 “These guys can make music with anything!” said Rose Wornoff of the Peterborough Victoria Northumberland and Clarington Catholic District School Board. “They have washboards, jaw-harps, and harmonicas. And that is aside from the incredible fiddle, banjo and singing. Our group was simply transfixed from the moment they started playing.”

Sheesham and Lotus will be appearing on Friday, May 25th, 8PM, at the Kynoch Community Hall in Kynoch, ON; on Saturday, May 26th, 8 PM at the Richards Landing Old Town Hall, on St. Joseph Island; and on Sunday, May 27th, for a 2PM children’s show and a 7PM concert at the STW Studio Theatre, 121 Pittsburgh Ave in Sault Ste Marie, Ontario.  Tickets are now available on line  here or can be purchased at the door for all concerts. Reservations can also be made by calling 705 782 4311.  Tickets for all evening shows are $20/person, $15/student, $10/12 and under.  Tickets for the one-hour Children’s Show at the STW Studio Theatre are $12/child, $15/adult.

Sheesham and Lotus are Teilhard Frost and Sam Allison, who met as the rhythm section for Canadian fiddle band Flapjack. For seven years they toured together throughout Canada and the USA playing dances, dance-camps, concerts and workshops. It was during this time that both Frost and Allison took a keen interest in the folk traditions of North America, particularly the American south. Both became enthusiastic historians of old-time fiddle and banjo music, learning from the old masters across the regions south of the Mason-Dixon Line. Through personal instruction, perseverance and osmosis they learned harmonica, jaw-harp, flatfoot stepdancing and song. Since then, Sheesham and Lotus have performed at major Canadian folk festivals in Winnipeg, Ottawa, Peterborough, Lunenberg, NS, as well as Vermont’s Champlain Valley Folk Festival and Sudbury’s Northern Lights Festival Boreal, endearing themselves to audiences around the North American festival scene with their witty live show and astonishing musicality.  During August of 2010, Sheesham and Lotus played dates in Paris and Bordeaux, France.

“Like lightning, Kingston’s duo, Sheesham and Lotus magically hit the room with their old time banjo, fiddle, harmonica, harmonies and antics, harkening us all back to ragtime and vaudeville” – The Kingston Whig-Standard

AlgomaTrad concerts are supported by grants from the Ontario Trillium Foundation and the “Fresh Start!” Program, Department of Canadian Heritage.