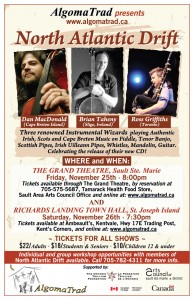 ALGOMATRAD is excited to announce two Algoma area concerts by a trio of Celtic instrumental wizards at the end of November. Cape Breton fiddler Dan MacDonald, who taught at the AlgomaTrad Camp in ’08 and ’09, is returning to the region to perform with his new group, North Atlantic Drift.  North Atlantic Drift, made up of piper Ross Griffiths and tenor banjo/guitar maestro Brian Taheny as well as MacDonald, has just released a self-titled CD. Together they are an entire Celtic orchestra in a trio. In one sitting you’ll hear Cape Breton fiddle, Sligo fiddle, tenor banjo, guitar, mandolin, Irish Uilleann pipes, Scottish Highland and Border pipes, whistles and bodhran.  Along with this impressive display of multi-instrumental talent is the striking blend of the separate traditions at work from players with deep roots in those traditions.

North Atlantic Drift will be performing at the Grand Theatre in Sault Ste. Marie, Friday, November 25, 8PM and at the Town Hall in Richards Landing on Saturday, November 26, 7:30PM.

Don’t miss an opportunity to see these multi-talented ambassadors of Irish, Scottish and Cape Breton traditions contrast and compliment each other. Tickets for all shows are $22/adults, $18/seniors and students, and $10/12 and under. Richards Landing show tickets available at Ambeault’s, Kentvale, Kent’s Corners, and 17E Trading Post. Grand Theatre tickets available at the Grand Theatre, by reservation at 575 5687, at the Tamarack Health Food Store in the Churchill Mall, and at the Sault Area Arts Council Office.

North Atlantic Drift – Who They Are!

DAN MACDONALD is from a family of musicians from the small village of Ironville, Cape Breton and began playing fiddle at a very early age. His fiddle education came mostly from his father, Lloyd MacDonald, who is a well-known and respected Cape Breton fiddler, and from the surrounding musical culture of Cape Breton Island. Cape Breton Fiddler’s Association practices in Baddeck, the Gaelic Maud in St. Ann’s, playing for dances in Glencoe and playing for Highland dance and Cape Breton stepdance groups formed the basis for his music. The big Cape Breton concerts: Big Pond, Cheticamp, Highland Village day, Broad Cove and many others were the backdrop of his childhood.  In the late 1980’s, MacDonald, and his family formed Scumalash, a traditional Cape Breton band, with whom he toured throughout the United Kingdom between 1988 and 1992, culminating in the release of a self-titled album. Scumalash has recently returned from a reunion tour of England.

In 2001 MacDonald moved to Bowling Green, Ohio where he began playing with a traditional Irish group, Toraigh. Toraigh toured the Celtic festivals of the Midwest, including the Cincinnati Celtic Festival, Dayton Celtic Festival, and the Newport Irish Festival. During this time period MacDonald was also able to compete twice in the Midwest Fleadh (regional Irish Music competition) in the senior fiddle and ceilidh band competitions with a band involving some of Detroit’s foremost Irish musicians, placing second in both categories.

MacDonald moved to Toronto in 2003, where he became a co-host at the Irish music session at Dora Keogh Irish pub and later became a member of the traditional Irish group, Spraoi. Spraoi has played to sold out audiences at the Tranzac, Hugh’s Room and the Brampton Folk Festival. In 2006, MacDonald became music director of The Magic of Ireland, an Irish dance and music show, with which he toured the UK, Canada, the USA and Europe, including a tour in Germany with Algoma resident, Pat O’Gorman. In recent years, MacDonald has been a mainstay at the Irish music session at Dora Keogh and Ceili Cottage Irish pub in Toronto as well as producing an Irish/Scottish dance and music show called Brogue, which plays at folk clubs and festivals and theatres all over Ontario and the United States.  In addition, MacDonald still tours with his brothers Paul and Shawn and his father Lloyd, playing at several festivals and school performances in Ireland over the last two years and most recently playing several shows for the Celtic Colours festival in Cape Breton.

Brian has also been called upon to do session work, producing and arranging for various different events, movies and albums. He has recorded on over 70 albums, most recently with Loreena McKennitt as well as a duet Mando album with Andrew Collins called ‘Mandolore’. Other artists he has recorded with are  Bruce Guthro; Dan Crary ; James Keelaghan; Oliver Schroer,  Solitude’s/Somerset Entertainment, Anneliese Cameron, to mention a few. Brian is also a member of a Banjo Group “The Banjo Special” featuring the different traditional styles of playing on both 5 String and Tenor Banjo.

ROSS GRIFFITHS is a veteran highland bagpiper, raised in the folds of the competitive highland bagpipe scene in Ontario.  Ross spent 20 years immersed in the world pipe band circuit with numerous compositions to his name played by pipe bands across the globe.  After years of dedication to the Scottish pipes, in 2004 Ross set sail across the Irish Sea to the land of whistles and the beloved Uilleann pipes.  He now enjoys the best of both worlds living in Toronto where he defends the bagpipes influence on both streams of traditional music.

Ross began his study of the Great Highland Bagpipe within the ranks of a Canadian highland regimental pipe band, the Essex & Kent Scottish, at the age of eleven.  He was fortunate to have the guidance of a Pipe Major who was a world class piper and teacher and soon Ross found himself in the highly regarded Grade 1 band, the Toronto & District Caledonia, at age 16.  Within a few years Ross was a major musical contributor to the band for his ability as a musician, composer and arranger of pipe music.  Ross’ compositions have been recorded by numerous pipe bands here and around the world including Strathclyde Police and 4-time Grade 1 World Champion Field Marshal Montgomery Pipe Band.  Retired from the world of pipe bands, Ross now resides in Toronto where he enjoys playing in a diverse collection of smaller ensembles with Scotish border pipes, Irish whistles and his most recent favourite, the Irish uilleann pipes.