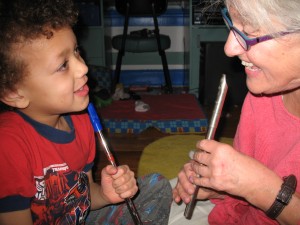 Karen started playing Irish traditional music when she discovered Comhaltas Ceoltoiri Eireann in 1978 and over the years learned from all the great Toronto players as well as the late and wonderful pipe-maker/whistle player Chris Langan.  In 1981, she went to Ireland to study the whistle with Mary Bergin at the Willie Clancy School. In the early 90’s, she began playing the concertina as well and has studied with Noel Hill, Jack Gilder from Jodi’s Heaven, and Frank Edgely from Windsor. She teaches students, young and old alike, attends sessions around Toronto and plays the occasional gig with various other musicians. Karen was a founding member of the Toronto band Jigsaw along with Debbie Quiggley and Keith Murphy.  Now a retired school teacher, she had great success with her very young whistle students and is proud of claiming to have been the impetus behind the great young star, Eli Howard. She is also proud of sharing the North American Comhaltas Hall of Fame with the likes of Chris Langan, Ena O’Brien,  Ray Caldwell and many other fabulous musicians, including our own Pat O’Gorman.  Karen is excited to be returning to AlgomaTrad 2012!