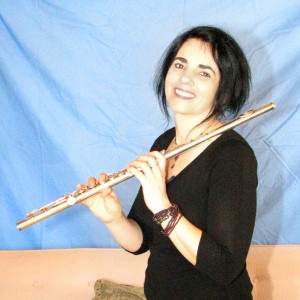 Denise Levac has been steeped in trad music for more than 25 years. A classically trained flutist, she discovered the Lanaudière (Québec region) trad scene in the early 1980s as a friend and fan of groups that include La Bottine Souriante, La Guignolée, Turlure and other. A member of the popular trad group Manigance (Normand Miron, Paul Marchand, Bernard Simard, Daniel Lemieux and Jacques Landry) from 1987-1990, she left the concert stage for to raise a family but continued to work in the milieu as an employee of Les Productions Mille-Pattes (La Bottine Souriante and others) and the Festival Mémoire et Racines. She also continued to play and perform with a wide variety of people throughout this period, giving her a great deal of experience working with different approaches. Prior to her “official” return to the scene, she completed a technical degree in traditional music and song – the only one of its kind – at the Cégep de Lanaudière in Joliette, Québec.