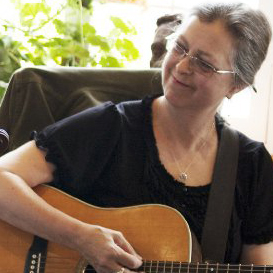 Born and raised in New England, Dana Whittle, singer-song-and-reel-writer, guitarist, “podorythmiste” (foot-tapper), accordionist and immigrante réçue residing in Ste-Béatrix, Québec, offers music lovers a taste of the unique cultural mélange of her New England folk roots and her experience as an American transplanted to Québec. Her interpretations of traditional songs and original compositions are heavily influenced by the traditional Québécois music she has played for the past two decades.

Known for her harmonic abilities, in addition to her work with Dentdelion, she can be heard on numerous albums as a guest artist – Yves Lambert, Linda Breitag, Tess LeBlanc, Patti Casey – and of course, Claude Méthé’s CFMA-nominated solo release “L’amant confesseur”.

Born into a family of serious car-singers (her grandmother was a singer with NYC’s Metropolitan Opera), she began playing guitar at age six, sang in the church choir and performed in school musicals, always encouraged by her music-loving parents. At university, Dana spent most of her time behind her guitar in coffeehouses and bars while pursuing a Fine Arts degree. For thirty-plus years she has performed as a member of folk and bluegrass groups in New England, New York and Georgia, as a solo performer and as a backup musician for other folk and traditional artists (Claude Méthé, Normand Miron, Tess LeBlanc, Elizabeth von Trapp and more). Her deep friendship with late-great Franco-American singer and cultural activist Martha Pellerin led to the 1990 formation of their group Jeter le Pont and countless performances in the U.S. and Canada, as well as the release of two albums.

In 1994, Dentdelion was born as a duo with fiddler-husband Claude Méthé. Performing, recording and lots of time spent backing Québéc instrumentalists have helped her to hone a personal style that cements her unique vocal and rythmic style with direct, traditional attitude.

She is the founder and former president of Folquébec, Québec’s first organization dedicated to international promotion of Québec folk talent.