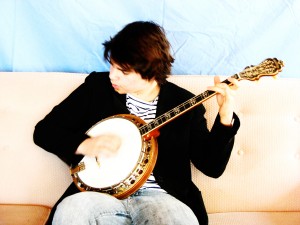 Colin Savoie-Levac is 17 years old and a native of Saint-Jean-de-Matha, Québec. Born into a musical family, he has long been a singer of traditional songs and began to play the mandolin at the age of 12. Not long after, he added tenor banjo, guitar and foot percussion to his talents and began studying traditional music with multi-instrumentalist and foot percussionist Michel Bordeleau (La Bottine Souriante, Les Charbonniers de l’Enfer), guitarist Simon Marion and Belgian-born, Montréal-based banjo player Guy Donis (Mademoiselle s’Amuse).

He made his formal début on the “grande scène” during the 2006 St- Jean-Baptiste celebration in Park Maisonneuve, Montréal (for the Québec national holiday), performing alongside several other young artists with Yves Lambert (La Bottine Souriante) and his Bébert Orchestra for a public of 250,000 people.

Since 2007 he has been a member of trad-folk group Dentdelion (Denise Levac, Claude Méthé, Dana Whittle, Béatrix Méthé), with whom he has performed in Québec, Canada, France, Denmark and the US. He is also a member of the award-winning young Québec trad-folk group Les Poules à Colin (with Béatrix Méthé, Marie Savoie-Levac, Sarah Marchand and Éléonore Pitre) and performs frequently with Montréal fiddler Alexis Chartrand.