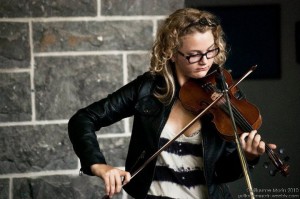 Béatrix Méthé is 15 years old and lives in Ste-Béatrix, Québec. The daughter of musicians Claude Méthé and Dana Whittle, she began to play the violin at the age of nine, in third grade. At school, she studied classical music; she was also a member of the acclaimed Orchestre des Jeunes de Joliette (Joliette Youth Orchestra) for three years. Béatrix is a member of folk-trad group Dentdelion, with whom she has performed and toured since 2006 (Canada, US, Denmark, France).

Since she was a small child, she has traveled extensively with her family, performing in festivals and concerts and participating at music camps. She toured Scotland and the Shetland Isles with a band made up of family members, American fiddler Laura Risk  and stepdancer-caller Marie-Soleil Pilette and has been lucky enough to learn from and play alongside these wonderful musicians and many more, among them fiddlers Pascal Gemme, Stéphanie Lépine, André Brunet, Aly Bain and Alastair Fraser.

An accomplished singer and budding composer herself, she wrote her first tune at the age of 4 (on piano). In 2006, dhe helped to create and perform (with a crew of young fiddlers) a 60th birthday tune for Scottish fiddler Aly Bain, after a week studying and jamming with him, Phil Cunningham and countless other fabulous players at Fiddle Frenzy in Shetland. In a 2008 competition, Béatrix won a provincial scholarship to attend the Camp Musical de Lanaudière (classical) and has also attended Camp ViolonTradQuébec where she studied fiddle with André Brunet and Stéphanie Lépine.