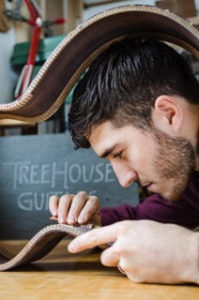 Guitar, cello, tin whistle, piano, vocals, composer, luthier |Zach, 26, Julie Schryer’s eldest son, plays guitar, cello, tin whistle, and piano. He also sings and composes songs and tunes. He has been performing with his mom in family concerts and dances for 13 years throughout the Algoma region, Quebec and the USA. He has attended AlgomaTrad since its inception 14 years ago and has studied with some of North America’s finest traditional musicians and dancers. He performed as part of “Schryer”, the group made up of his mom, his 4 uncles and his cousins, who were the headline act for the gala concert at the Shelburne Fiddle and Stepdance Contest in 2007 and at the Chelmsford Fiddle and Stepdance Festival in 2009.

Zach has been writing tunes in the traditional style for over 14 years, several which are performed by the family group at dances and in concert. He has also performed with the Brian Pickell Band on several occasions and with Shane Cook and Troy MacGillivray and appears on Ian Bell’s recording “Forget Me Not, When Far Away”. He and his brother, Benoit, performed on tour with Troy MacGillivray in January 2013.

Zach has studied with renowned luthier Sergei de Yonge and now builds guitars full time and is gaining world-wide recognition for his skill and beautiful work. His guitars are distinct for their pyrographic artwork, another of Zach’s talents (www.treehouseguitars.com). Zach’s song, Little Log Cabin, from The O’Schraves 2014 CD release “Family Day” was a Northeastern Ontario regional finalist in CBC’s Searchlight Contest.