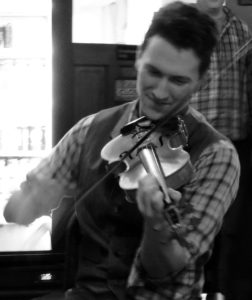 Fiddle, tenor banjo, tin whistle, mandolin, guitar, vocals |  Benoit, 23, is Julie Schryer’s youngest son and plays fiddle and tenor banjo, sings and also plays tin whistle, mandolin and guitar. Benoit started to play the tin whistle at 5 years of age and fiddle at 7. He has learned from some of Canada’s finest fiddlers (Shane Cook, Mark Sullivan, Pierre Schryer,  James Stephens, and Dan MacDonald) while on the road touring with his mom and as a student at AlgomaTrad.  In 2012, Benoit spent a month studying traditional music in Ireland as part of his secondary school co-op program. Like Zach, he has attended AlgomaTrad since its inception, has performed with the family band throughout Ontario, Quebec, British Columbia, and Michigan for the last 13 years, and was part of the “Schryer” concerts at Shelburne and Chelmsford in ’07 and ‘09. Benoit studied violin at the Sault Symphony School of Music and at the Algoma Conservatory, has won numerous awards at the Sault Kiwanis Festival, and has competed in many fiddle competitions. 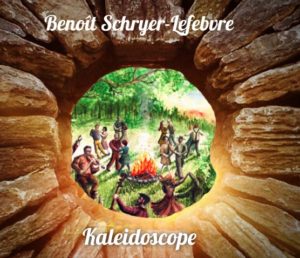 In August of 2010, Benoit was invited to perform in the Junior Showcase at the Canadian Grand Masters Fiddle Competition in Ottawa.  In 2011 and 2012, he placed first in the 18 and under class at the Pembroke Fiddle and Stepdance Contest, arguably the premier contest for Ontario fiddlers outside of Shelburne. In 2015 and 2016 he came 2nd at Pembroke, losing out both times to reigning Canadian Grand Master Fiddle champions. Benoit has performed with the Brian Pickell Band and Shane Cook and Troy MacGillivray. He also performs with the stellar contra/square dance band, “Ladies Chain”, with Eli Howard and Colin Savoie-Levac, In 2016, Benoit released his self-produced solo recording “Kaleidoscope”. He completed the Heritage Stonemasonry program at Algonquin College in Perth Ontario in 2016.