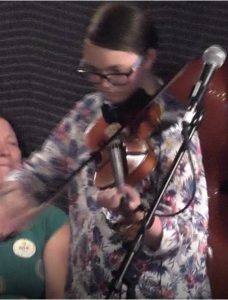 Fiddle, whistle, vocals | Áine, 15, Julie and Pat’s youngest child, plays fiddle, tin whistle, and sings. She has been soaking up traditional music since before she was born. She has been absorbing fiddle tunes from all of the musicians she has hung out with over the last 12 years on the road, at home and at AlgomaTrad.  She also studies violin at the Algoma Conservatory, and has been performing on stage for most of her life. In 2012, Áine came first out of 24 contestants in the 9 and under age group at the Pembroke Fiddle and Stepdance Contest, and in 2015 she won in the 12 and under fiddle contest there. In 2016, she won the 15 and Under at the Northern Ontario Fiddle Championship in Chelmsford and came 3rd in the 18 and under at Pembroke, her first year in this age group. Áine has performed with her family on tour since the band’s inception. She continues to hone her skills on the fiddle, playing regularly with her family at contra dances in the Algoma Region and beyond.