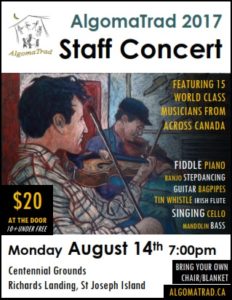 The annual AlgomaTrad Staff Concert, featuring 15 world-class musicians and performers, is scheduled for Monday, August 14, 7:00 PM at the Centennial Grounds in Richards Landing. Admission at the door is $20, children 10 and under free. The line-up will include:

Singer and flute player Allison Lupton – awarded top honours from Folk Music Ontario for her song “One More Day” in the 2015 FMO Songs from the Heart competition, Allison was a featured performer at this year’s Mariposa Folk Festival;

Michael Ball and Jody Benjamin –  have been performing and recording on the Canadian music scene for years with their own projects, running the gamut from old country and alt country to cajun and zydeco and from bluegrass to American Old-time;

Kimberley Holmes  – one of Canada’s premier piano accompanists in traditional music,  Kimberly has performed with a who’s who of Canadian fiddlers, including Shane Cook and Calvin Vollrath and with  Sherryl Fitzpatrick in their group, the Bflat Sisters;

Joseph Phillips – returning as well to work his Bass and Guitar magic with all the staff musicians. Joe performed regularly with the Pierre Schryer Band and the London Symphony Orchestra and currently tours with  Jayme Stone’s Folklife;

Citizen Jane (citizenjanemusic.com) – featuring the songwriting Reenie Perkovic, a semi-finalist in the 2016 UK Songwriting Contest, accompanied by one of AlgomaTrad’s favourite musicians on fiddle and viola, Lea Kirstein;

Other evening events include Community Dances and the always entertaining Live Auction, slated for Thursday evening, August 17, which raises funds for the Nicholas Missere Bursary Fund, a fund that helps families and individuals take part in AlgomaTrad events and workshops. Check out an evening schedule at algomatrad.ca/camp/schedule/.