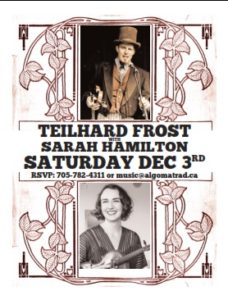 AlgomaTrad is hosting a house concert with Teilhard Frost (Sheesham & Lotus & ‘Son) and Sarah Hamilton (Pigeon Hawk Stringband, Annie Lou) at the home of The O’Schraves near Desbarats on Saturday, December 3, 8pm. Seating is very limited, so call us at 705 257 6106 to reserve a spot! Cost is $20. Click on the poster to download a pdf version and print and post it on your fridge as a reminder! 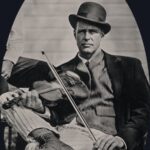 Teilhard Frost (also known as Sheesham Crowe) is no stranger to the Algoma region. He has been an instructor and performer for several years at the AlgomaTrad Family Camp, and performed a sold out show with the duo Sheesham & Lotus on St. Joseph Island several years ago. Teilhard was raised on Manitoulin Island playing some fiddle as well as jaw harp and harmonica and he continues to this day enjoying and sharing the music of the people with the people.

While living in Toronto in the 1990’s, Teilhard co-founded experimental band ‘Subtonic Monks’ and Cuban Son band ‘Klave y Kongo’, and was recording as a session musician for T.V. and radio. Teilhard joined Sam Allison (Lotus Wight)  as the rhythm section for bush swing band Flapjack. Flapjack specialized in Canadian fiddle repertoire, including the songs of legendary Mack Beattie and his Ottawa Valley Melodiers, Newfoundland fiddlers Emile Benoit, and Rufus Guinchard, and played the tunes and songs of Jamie Snyder as well as new original material in the old time style.

Touring for seven years in the U.S. and Canada playing for contra dances and festivals, Teilhard and Sam had the time to really fall into a good groove. They played constantly while on the road, on stage and off. With Flapjack, Teilhard played bones, washboard, harmonica, jaw harp, stepped and sang. Outside the band, Teilhard was taken by the sound of old time Appalachian string band music and would ceaselessly play fiddle with Sam on banjo until the morning’s light. Eventually, Flapjack packed it in, but Teilhard and Sam continued to play occasional gigs together, with great response. Encouraged by their community to carry on and make more music together, Sheesham & Lotus were discovered, covered in dust. 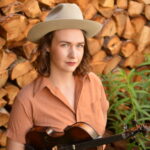 Born and raised in Whitehorse, Yukon, Sarah Hamilton was surrounded by oldtime and bluegrass from an early age. She has been playing fiddle since the age of six, and started performing professionally at the age of 14. Spending the majority of her growing years in her father’s recording studio Sarah has developed a base of musical understanding that is well beyond her years.   She has toured nationally and internationally, as a driving force in The Done Gone String Band, and accompanying groups such as Reuben and the Dark, and Spencer Jo and the River Ramble in Calgary, Alberta.
Sarah is now located in Toronto, Ontario where she is singing and playing in up and coming oldtime troupe Pigeonhawk Stringband and local swing orchestra Combo Royale. She also tours in the Annie Lou band. Sarah has just released her first solo recording, a combination of Appalachian oldtime and western swing tunes recorded with Bob Hamilton at Old Crow Recording. Sarah has an at-ease charm when she performs, as though she was meant to hold a fiddle at all times. The strength of song flows freely, and Sarah is a youthful champion of an older time and sound.