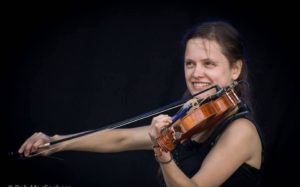 Kerry Fitzgerald is a fiddler and step dancer originally from Bancroft, ON, Canada, now based in Toronto. Her musical roots are Ottawa-Valley fiddling and step dancing. She has also explored various Celtic and folk styles. Most recently, Kerry is pushing the boundaries of Celtic music with her solo “electro-fiddle” fusion project Fiddle Beatz, where she writes, arranges, and produces electronic arrangements of original fiddle tunes. She released her debut Fiddle Beatz album in May 2018, and most recent singles,Think You Know and Beauty&The Beatz in 2020

Kerry’s performing career began at a young age with her family group, Everything Fitz, which has taken her on several extensive North American tours. She currently tours internationally with Canadian Folk Music Award Nominees, The Fitzgeralds, including recent tours of Germany, Switzerland, North America, Ireland, and the UK. As part of the UK tour, The Fitzgeralds were featured as musical guests on Nathan Carter’s BBC Christmas special. A recent video of the group’s high-energy dance performance went viral via Ireland’s Independent.ie with over 7 million views! The Fitzgeralds continue to be a hit at major festivals including Milwaukee Irish Fest (US), Dayton Irish Fest (US), Cleveland Irish Fest (US), Iowa Irish Fest (US) Shrewsbury Folk Fest (UK), Mariposa Folk Fest (CA), Stan Rogers Folk Fest (CA). Kerry also tours with The Stepcrew and Nathan Carter, and has been a guest fiddler and step dancer with Natalie McMaster, Leahy, and We Banjo 3. Between tours, she completed a double major in Kinesiology and Foods&Nutrition from Western University!