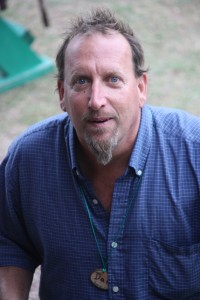 Daniel Gorno performs and teaches traditional dances from Ireland, France, England, Canada and Appalachia.  He strives to entertain, inspire and educate workshop participants and audiences in experiencing dance as it has been created and moulded by cultures and generations. He has studied step dancing and traditional social dancing for 25 years, most notably with Benoit Bourque, one of Quebec’s great stepdancers.  Daniel plays bones and bodhran at dances and school programs with string band Tanglemere, and leads workshops in jitterbug, waltz, polka, Cajun dance and even a tango or two. An original member of « Dance All Night » and current dancer with « Step in Time, » Daniel also calls contras and squares. Dan has been involved with AlgomaTrad since it’s inception and travels to the Algoma region 3 or 4 times a year to call dances and lead workshops.

Dan grew up on Grosse Ile, Michigan, a large island in the Great Lakes chain, and one of his early pastimes was digging in the dumps behind old abandoned homesteads.   There he found early American salt-glazed stoneware and redware as well as European and Asian imported pottery.  When he was fourteen he started throwing for a local potter, and won the « Artist of the Year » award as a senior in high school.   He attended Thomas Jefferson College studying pottery and kiln building.  After College he had pottery apprenticeships in Courtmacsherry, Ireland and La Borne, France.  In addition, his wood firing and kiln building experiences have taken him to Canada, Mississippi, California, and back to Michigan. He has been a potter for 36 years.